The outside of the card might not seem like much, but it’s the inside that counts the most! For Father’s Day this year, I’m starting a new tradition.  I asked J a few questions about his dad and wrote down his responses.  When he made  his Father’s Day card (this year was just construction paper, stickers and markers), I made sure he left space for me to include his responses.  The plan is to do this every year.  Hopefully posting this here will help me remember to keep it up!

We also did this for his Grandpa’s card.

My questions were basically geared towards getting a 3 year old to share his thoughts on dad/grandpa. Here’s how one of our conversations went…

I personally would love to get a card with my son’s thoughts about me, however simple.  I’m hoping dad and grandpa love it too.

J made these Valentines cards for his cousins.

What you need:  Unopened box of candy and a few extra pieces of the candy, construction paper, cardstock, car stickers, marker, and glue

Prep:  I precut all the pieces of the truck for him to glue onto the cardstock and already had the “Happy Valentine’s Day” message on the cardstock.

J  put the shapes together to create the truck and then added the box of candy at the end.

The front of the card has a little road with some foam car stickers.  I thought it turned out pretty cute

This is from Busy Bee Craft Kids.com .  Of course, I didn’t plan for the candy box to be glued on at a tilt (in effect, dumping its cargo).  Oops!

I saw this idea on Children’s Learning Activities last year and thought the message was so cute.  I’ve had it stored away in my mind since.

For J, this activity was a ton of finger painting fun.  I taped some butcher paper on our kitchen floor and gave him a plate of finger paint.  He ended up filling 4 or 5 long sheets of paper.   While he was enjoying all the painting, I was sure to get some hand and footprints out of the fun.  We ended up having more than enough prints for grandparents, great-grandparents, aunts, and some for mom to keep too.

They’re ready for the mailbox!

Here’s the card J made one of his cousins for Valentines Day.  It was actually a fun way to practice letters.  We’ll probably reuse this activity some other time.

What You Need: Pull and Peel Twizzlers, Glue, Cardstock, pencil

Prep: I actually precut for the Twizzlers for him and already had the message written in pencil on the cardstock for him.

He traced the letters with glue and then added the Twizzlers.  After awhile he got tired of gluing, so I took over that part.  To incorporate some learning, I asked him how many long/short pieces were needed for each letter prior to gluing.  We also had lots of opportunities to repeat the words verticle and horizontal.  He then added some math practice of his own as he decided to pattern the heart stickers and later the heart twizzler shapes.

I did help him on the spirals since it was a little too intricate for him to do alone.  They’re supposed to be flowers, but J thought they looked like lollipops.  Either one works!

J made two butterfly birthday cards, one for his grandmother and one for his cousin who both love butterflies.  I remembered an adorable card a college roommate made me way back when and decided we would try a toddler version of the same.

I also found these instructions from Enchanted Learning and modeled ours close to that.  Basically I cut out two butterfly shapes and then trimmed one about an inch smaller than the other (saving the trimming for our 2nd butterfly).  The other supplies we used were googly eyes, glue, a stamp pad, hole puch, and pipe cleaners.

J could do most of the rest really.  Though this was J’s first attempt with a hole punch and it was honestly too difficult.  Eventually he just pushed the puncher down over the paper and thought he was helping as I gripped the handles and did the work.  He found the hole puncher very intriguing!

His favorite part was the fingerprints.  I should’ve known red ink last a LONG time on fingers.  It’s supposed to be washable… and I guess it technically was, but it tooks LOTS of washing. 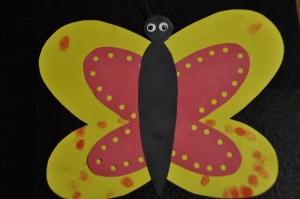 I forgot to show the final result when we had the birthday message written on the cards too.  I thought they turned out cute.  They would work as Valentines, Mother’s Day, or birthday cards or even as decor for springtime.  I think it would be pretty to create a few different designs and hang them all together on a mobile.

My grandparents are always telling me that really all they want for birthdays or Mother’s day are lots of pictures to show off.  So this year, J made a photo-filled birthday card for his great-grandma.  This would be a great art project for toddlers to give at Christmas time.

All you really need is a stack of ziploc bags, photos and a stapler and/or duct tape.  To make this activity last longer, I added construction paper and various art supplies to the materials.  I set out the materials and J chose how to decorate each page (stamps, stickers, dot markers, crayons, rolling stamps, …  hmmm that’s all I remember).  He then chose which picture he wanted to place with each page and placed both his art piece and his photo into the ziploc bag.  I stapled all the opened end of the bags together and covered it with fun green duct tape.

Older kids could write their own story, draw their own pictures and give their first published piece to grandpa or grandma.

J made these Christmas tree cards to include in our shoeboxes for Operation Christmas Child.  I precut the trees then he lined them up according to size and glued them onto the paper like a puzzle.  (I sneak in some learning whenever possible!)  He glued the different jewels on for decoration, added a star sticker and trunk and was finished.  I thought they turned out pretty cute.

This idea came to me as I was getting out construction paper for J to make his Great Grandpa a card to send in the mail.  I got the materials ready in a matter of minutes while J waited patiently 🙂  It’s certainly not a flashy card, but it offered great reinforcement with his letters and J enjoyed creating it.

PREP: I wrote out a message on the construction paper, leaving out the first letter of each word.  I placed in its stead (is that how you use that word??) an empty box so that J knew where the glue (and letter) should go.  Then, with another color of paper, I wrote the missing letters and cut them out.

With J:  I set out all the missing letters along with some glue and the actual card in front of him.  We started with the first word of the message (_appy); I pointed out that this was a word but it was missing the first letter.  I said the word, emphasizing the H sound and then told him he needed to added the letter H to finish the word.  He would search out the correct letter and glue it in place.  **One of the tv shows he gets to watch a few times each week is Word World where they build words to create the different characters and props for the show.  J has been pushing letters together ever since, claiming he created a word like on the show.  This activity really just put into practice what he saw on tv.**

He finished all the words in the message, added the hearts, stickers and a drawing on the card.  It’s really a simple card, but it was a great way to emphasize the letter sounds and reinforce the letter names.  In fact, I discovered that he knows the letter Y, something I personally haven’t taught him. 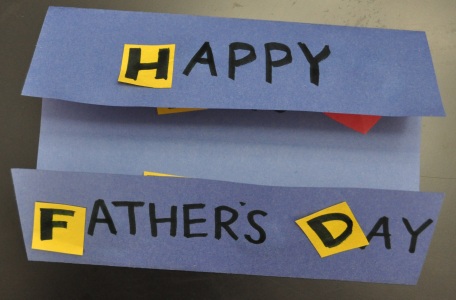 As I was picking up, I realized that I could’ve used letter stickers instead of having to write and cut out the letters. That would’ve made for even less prep for the activity.

Future Use: I think next time I will use this as a way to test his knowledge of the letter sounds.  Instead of giving him the name of the letter along with the sound, I will just ask him to find the letter that makes the sound “sss”…

This would also be a good plane activity, but I would definitely use stickers rather than glue on the plane. 🙂

My mom came to visit us a few weeks after Mother’s day, so I was saving J’s present for her as well as our present for her until then.  This was J’s gift to Ne’eNe’e (Grandma).  I printed the form as well as some colorful letter A’s and a picture of J and Ne’eNe’e together.  To be sure he placed the A’s in the correct spots, I drew a yellow dot where each A should be placed.  He glued those and the picture in place, colored the report card, and added some stickers at the end (I forgot to take a picture of his final product). 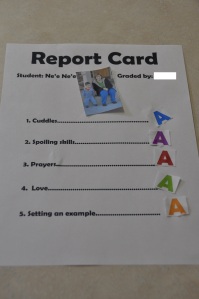 I decided on the report card theme because my mom recently had to quit school and is disappointed that she wouldn’t have that 4.0 graduation she had been dreaming of.  A little reminder that she’s a straight A “student” in our books!

While I do believe J is the smartest little boy ever, I will admit that my one year old cannot yet read.  He’s oh so close though!  He picks up any book and proceeds to read it aloud to mommy/daddy/the nearest stuffed animal.  Ok, his “reading” consists of repeating “Bible, Bible, Bible” or “babeedoody neyno nee A-A-O-O-A”, but that’s means he’s close right!?!?!

So until he masters phonics, I decided pictures would help him understand the messages he (ok Mommy) is sending to Grandma R for Valentines day.  Of course Grandma loves to get pictures too, so she won’t mind in the least!

This is basically a No Glue Collage which I love since we’re still practicing the art of gluing so that takes longer.

Age? 22 months but can be done earlier/later

Try Again?  We will try more No Glue Collages, I’m sure!