Sometimes our library visits are well organized, I’ve searched for books ahead of time, placed some holds, and researched authors.  Other times, it’s a random treasure hunt.  I love when you just happen to find great reads roaming the shelves! I have a feeling both of these authors will be place on our favorites list.

Fletcher and the Falling Leaves by Julia Rawlinson is wonderful.  Fletcher, an adorable little fox is concerned for his good friend when it begins shedding…. leaves.  He tries to come to his friend’s rescue to no avail.  Then he discovers that his friend still has beauty to share.  Fletcher is simply adorable.  The artwork by Tiphanie Beeke captures the story perfectly.  I love it!

South by Patrick McDonnell is a picture book, perfect for a toddler or preschooler “reading” on their own or for mom and dad to join in.  A tiny bird sleeps through the last moment of fall, and finds alone when all his bird-family have flown south.  A friendly cat saves the day as they make the trip towards southern warmth together and the tiny bird reunites with his family. No words, just pictures.  A story beautifully told.

Enjoy storytime and then go outside and play in the falling leaves!

Becoming an Artist: The Dot by Peter Reynolds

At our last library trip, we happened across the cutest story!

The Dot, by Peter Reynolds, is a story about a little girl who thinks she can’t draw until her teacher proves her wrong.  She’s inspired to keep trying and eventually inspires others too.

This was the perfect book for J.  He is such a perfectionist that he often chooses NOT to do something if he thinks that he won’t be able to do it “right”.  This book fulfilled its purpose and inspired my little guy to become an artist!

After reading the book, we decided to create our own art museum of dots.  I pulled out markers, crayons, map pencils, water colors and cardstock.  J was thrilled.  He was confident.  He became an artist and loved it!  He even wanted to sign his work, just like the little girl in the story.

After all his pieces dried, we hung them in his room.  We now have an in-house art museum featuring my favorite artist.

Snowflake Bentley, by Jacqueline Briggs Martin is a book I happened upon at the library.  It’s a non-fiction book actually, but told in story-book fashion about a boy named Willie Bentley who was fascinated with snowflakes.  As a child he would catch the snowflakes and attempt to draw them on paper before they melted.  Eventually his parents bought him a microscope camera to photograph the snowflakes.  Can you

imagine trying to photograph a snowflake using an 1882 camera!?!  I’m sure we’d all have trouble with our modern DSLRs! Amazingly, he stuck to his goal.  He held slideshows for townspeople to come see his photographs which were eventually published in a book called Snow Crystals that is used by colleges and universities. His fascination led to the discovery that all snowflakes are unique.

Throughout the book there are sidebars with extra facts about snow, William Bentley and his work.  I’m so glad I came across this book.   We used it to kick-start a discussion about snowflakes, photography, persistence, dedication and a job well-done.

Here’s a couple activities we did to go along with the book:

1. Snowflake matching –  I googled Snowflake Bentley photographs and printed out two copies of the same photos.  At first I presented 3-4 to match at a time since you have to really examine some to find the differences.  As he got better, he could match more at a time. 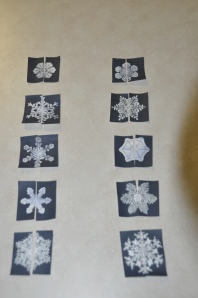 2. Snowflake puzzle – I cut some of Bentley’s photos in half, mixed them all up and J found the two symmetrical sides to join together and create a snowflake.  This was a great way to emphasize the meaning of symmetrical.  These 2 activities really met J’s current ability level since I could easily make the level of difficulty was just right for him by picking and choosing the snowflakes to match.

Age attempted: 33 months; you could go into so much more detail for older kids and increase the difficulty of the activities by using snowflakes that are more similar in comparison